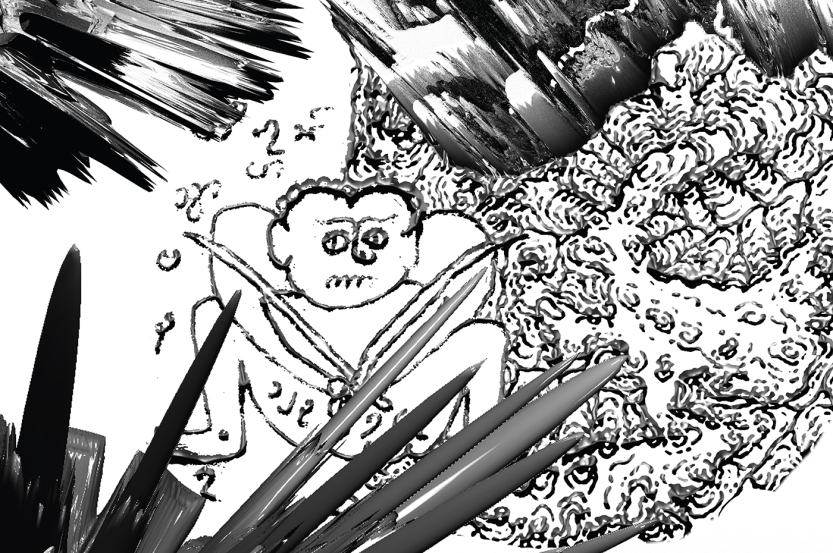 A program by Almanac; curated by Giulia Colletti and Matteo Mottin; with Leonardo Caffo, Ramona Ponzini, and The Forest Curriculum.

In the framework of the solo exhibition Perdix by Helena Hladilova, on December 2, 2021, at 7 pm, Almanac presents Green was the forest drenched with shadows, a research program entangling plants, animals and [more-than-]human entities in the metamorphic trope of the forest.

The Forest Curriculum (Abhijan Toto and Pujita Guha) investigates the cosmological systems of “Zomia”, the forested belt that connects South and Southeast Asia. Media Ghostingsis a lecture taking its cue from a fieldwork in Ramasun Camp, Thailand. During the Vietnam war Ramasun’s air was thick with electromagnetic waves that escaped human senses, discernible as paranormal. Hauntings – interruptions between the living and the dead – consequently found their way into Operation Wandering Soul, an American psy-op that drew on the Vietnamese folk belief that troubled souls woefully haunt the air, roving soldiers to dissuade locals from joining the war. Media Ghostings therefore investigates the entanglements between the global military-industrial complex and local cosmologies, but also how sonic and affective hauntings became crucial sensory mechanisms for the US Army to attune to non-/para-human sensibilities. How may mobile sounds be conjoined to the tropical forest, a space that with its growth and opaque densities confounds our visuality?

If the forest is a portal to other stories, what kind of stories have we been told? In his anti-novel – featured in a children’s book published by Almanac on the occasion of the exhibition – philosopher Leonardo Caffo plays with imagination and questions our interspecific relationship with the notion of original sin.

The three-channel sound installation frogs.picus.VANNA by artist Ramona Ponzini invites us to indulge in an exercise that echoes the Japanese practice of Shinrin-yoku. The hoarse and intermittent call of the frog in frogs, 19’30’’, is overwritten by the subdued chirping of birds and the screeching of insects that the artist challenges us to identify in picus, 18’58’’. This walkthrough with the eyes closed is accompanied by the electronic and liquid modulations of VANNA, 19’16’’. In its palimpsestic ecology, the work feeds into sonic movements conceived as a whole challenging the frontality of a live DJ set in favor of an immersive circularity where we tune our breath to the forest.

The event will also be broadcast in live streaming HERE.

Leonardo Caffo (1988) is a philosopher, writer and curator. His research takes its cue from the notion of post-human as well as from interspecific and identity studies. He is currently a Philosopher in Residence at Castello di Rivoli Museo d’Arte Contemporanea and Professor of Media and Fashion Aesthetics at Nuova Accademia di Belle Arti – NABA, Milan. In 2020, he curated the public program of the Milan Triennale and was Professor of Theoretical Philosophy at Politecnico, Turin. He collaborates with Corriere della Sera. His publications include La vita di ogni giorno (Einaudi, 2016), Fragile umanità (Einaudi, 2017), Il cane e il filosofo(Mondadori, 2020).

The Forest Curriculum is an itinerant and nomadic platform for (in)disciplinary research and mutual co-learning. It proposes to assemble a critique of the Anthropocene via the naturecultures of Zomia, the forested belt that connects South and Southeast Asia. The Forest Curriculum works with artists, researchers, indigenous organizations and thinkers, musicians, activists. It was founded and is co-directed by curators Abhijan Toto and Pujita Guha. Abhijan Toto (1994) is an independent curator and researcher, who has previously worked with the Dhaka Art Summit, Bellas Artes Projects, Manila and Council, Paris. He is the recipient of the 2019 Lorenzo Bonaldi Prize at the GAMeC, Bergamo. Pujita Guha (1994) is currently a Ph.D student and Chancellor’s Fellow at the University of California, Santa Barbara and publishes on South and Southeast Asian cultures and ecosophical thought. The Forest Curriculum collaborates with institutions and organizations in South, Southeast Asia and beyond, including the Arts Network Asia for the Forest Curriculum’s Summer School program, Savvy Contemporary, Berlin; Ghost:2561 Festival, Bangkok; SUGAR Contemporary, Toronto; Tentacles Artspace, Bangkok; Ideas City, Times Museum, among others.

The practice of Ramona Ponzini (1979) is inscribed in a hybrid territory, which combines techniques of the visual and literary arts, such as collage or Burroughsian cut-up, with sound experimentation and improvisation of a noise and jazz style. At the compositional level, the process adopted by Ponzini follows a purely conceptual matrix, crossing the idea of editing coded and reprocessed elements through the use of loop machines and both digital and analog effects. Her collaborations include those with Lee Ranaldo (Sonic Youth), Tom Greenwood (Jackie-O Motherfucker) and with industrial percussionist Z’ev. Her solo project, developed starting from 2016, consists of Dj sets contaminated by vocal interactions and of sound collages, hosted by OGR Turin, MACRO Museum of Contemporary Art in Rome and Galleria Norma Mangione in Turin, among others.

I miei Cinguettii
«Leonardo Caffo is one of the most exciting and innovative voices in international animal philosophy»
Matthew Calarco, Full Professor (California State University Fullerton)